The results of the world’s largest study into strategic communication and public relations are presented today. The European Communication Monitor 2019 surveyed 46 countries producing the following highlights:

END_OF_DOCUMENT_TOKEN_TO_BE_REPLACED 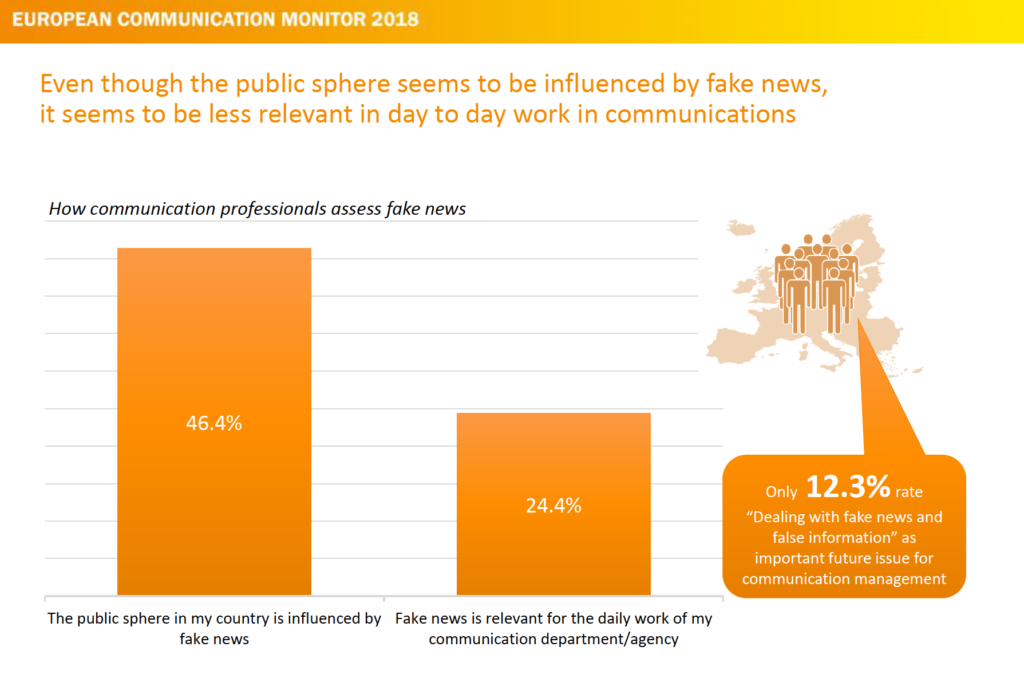 The communications agency has been supporting the European Communication Monitor (ECM), the world’s largest transnational survey on strategic communication issues, as a “Digital Communication Partner” since mid-February. The Fink & Fuchs team is actively participating in the redesign and operation of ECM’s online content, the development of additional information offerings and the active marketing of results. The Wiesbaden-based agency brings to the table of the 3-year partnership its 15-year expertise in the design and marketing of scientific research projects.

“We are delighted to have gained in Fink & Fuchs a new strategic partner who will continuously advise and actively support us in structuring our information offerings and marketing our research results,” says the Director of the ECM’s research projects Prof. Dr. Ansgar Zerfaß of the University of Leipzig. END_OF_DOCUMENT_TOKEN_TO_BE_REPLACED

More than 70 per cent of European communication professionals believe that big data will change their profession but only one quarter has a developed understanding of the topic. END_OF_DOCUMENT_TOKEN_TO_BE_REPLACED

Corporations and other organizations in Germany are handling the topic of social media communications more and more strategically. Most have moved beyond the experimentation stage. The learning processes of the past few years has led to increased investments in overall organizational structures. This is one of the key results identified by the nationwide study Social Media Governance 2012 (Delphi) in Germany, for which 860 communications professionals working in companies, governmental institutions, associations and non-profit organizations were surveyed by the University of Leipzig.

The joint project with Fink & Fuchs Public Relations (Wiesbaden) and the professional magazine “pressesprecher” (Berlin) was conducted for the third time in a row and can therefore be used to show developments over time. The quantitative findings reported here will be subsequently condensed into future outlooks for social media communications by an expert panels of intellectual leaders from the media, business and science. END_OF_DOCUMENT_TOKEN_TO_BE_REPLACED

Expertise, Structures and Strategies of Companies, Governmental Institutions and Non-Profit Organizations communicating on the Social Web

END_OF_DOCUMENT_TOKEN_TO_BE_REPLACED

How companies, the public sector, and NGOs handle the challenges of transparent communication on the Internet 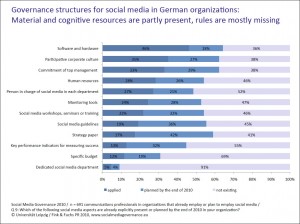 Social media have been introduced to organizations and feature high up on their agendas. This is not only true for the United States, but also for Germany as the largest and most innovative economy in Europe. Within the scope of “Enterprise 2.0,” the rise of social media not only applies to public relations and corporate communications, but to other departments and functions as well.

Top management is faced with the challenge of finding ways of dealing with this relatively new and usually anarchically introduced topic. As a result, the demand for systematically reflected strategies and associated regulatory frameworks for social media activities is greater than ever.  These were the findings of a recent scientific survey entitled “Social Media Governance – How companies, the public sector, and NGOs handle the challenges of transparent communication on the Internet.” While 54 per cent of the surveyed organizations already utilize social media, so far only 16 per cent have the necessary groundwork for strategic measures in the sense of Social Media Governance.
END_OF_DOCUMENT_TOKEN_TO_BE_REPLACED