The results of the world’s largest study into strategic communication and public relations are presented today. The European Communication Monitor 2019 surveyed 46 countries producing the following highlights:

As well as trust in communications as the main topic, the survey explores the challenges of transparency, Artificial Intelligence in strategic communication, and the future of content creation with detailed analysis for 22 countries. The study fulfills academic standards. It has been conducted and supported by a team of renowned communication professors from universities across Europe.

Professor Ansgar Zerfass, lead researcher of the survey, explained: “In the light of declining trust in the mass media, this year’s European Communication Monitor reveals a striking trust gap in the communications profession: Communication professionals feel trusted by their personal interaction partners, but expect low levels of trust in the branch among the general population. Enabling trustworthy advocates to communication functions and enhancing organisational transparency where appropriate are becoming key tasks for communication practitioners.”

Hans Koeleman, President of the European Association of Communication Directors (EACD) and Chief Corporate Communications & CSR Officer at KPN in the Netherlands, added: “Communications must get to grips with technological developments like the rise of Artificial Intelligence and new forms of content creation and distribution. The European Communication Monitor 2019 investigated on their impact and usage, and compared their perception among respondents from different countries, disciplines, and hierarchical levels. Our results deliver crucial insights for all communication practitioners who will have to tackle these technologies now or in the near future.”

In many countries, trust in the mass media and journalism is declining. This loss of trust might also be true for other communicators, especially those who communicate on behalf of companies and organisations. This is a key challenge for the profession, as communicators need to be trusted by the people they work for, such as senior executives and internal clients. Additionally, they are also dependent on the trust of journalists, bloggers, influencers and general public.

“The European Communication Monitor 2019 is the first study that has explored trust in communications across different levels, stakeholders and countries”, says lead researcher Professor Ansgar Zerfass from Leipzig University in Germany.

Results show that communication professionals experience low levels of trust in their line of work. The profession is only trusted by two third of top executives (67 per cent), and by a minority of influencers and bloggers (47 per cent), journalists (39 per cent) and ordinary people (27 per cent). But respondents are more positive about the perceived trust in their departments or agencies. 85 per cent of the respondents reported a positive attitude by executives or by clients, followed by 73 per cent perceived trust from journalists, 70 per cent from the general public and 68 per cent from influencers and bloggers. Professionals are the most positive about the perceived trust they enjoy personally. A vast majority feel trusted by their colleagues, bosses and internal clients, as well as by external stakeholders and audiences.

Trust in organisational advocates: External experts and leaders are top

Communication and PR professionals are not the only people speaking on behalf of organisations. Formal representatives like CEOs, board members or marketing and sales people, as well as other employees or members of the organisation play a role, whether they are coached by practitioners or not. External experts in the field, customers, supporters and even activists with overlapping interests can also be spokespeople. Knowing about different advocates and choosing or supporting them carefully is an important part of strategic communication. 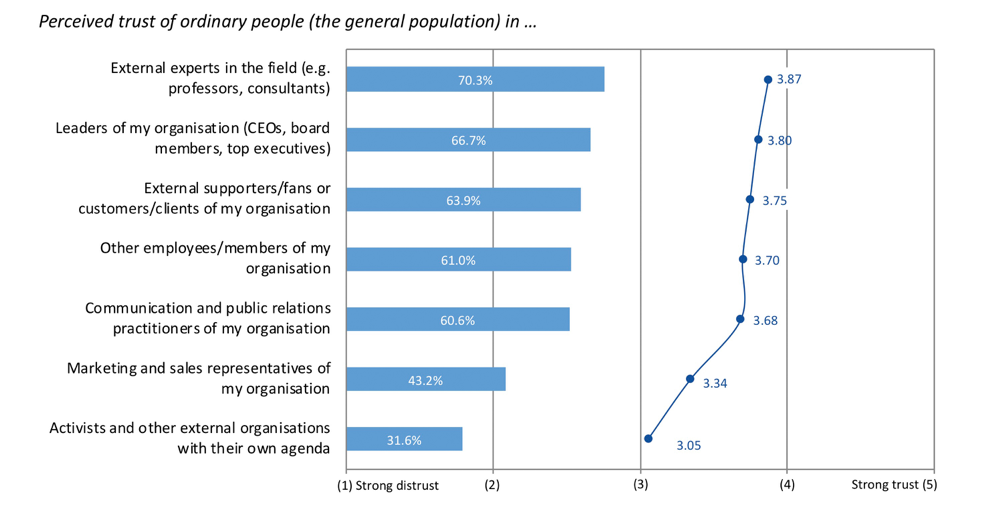 Interestingly, practitioners think that most of these advocates are more trustworthy than themselves. They perceive external experts in the field as the most trusted (70 per cent), followed by leaders of the organisation (CEOs, board members and top executives; 66 per cent) and external supporters such as customers or clients (63 per cent). Other employees or members of the organisation are reported to achieve a similar level of trust to communication professionals (61 per cent). Marketing and sales representatives are rated lower (43 per cent). Public trust in external organisations, such as activists, acting as advocates for organisations is perceived surprisingly low (31 per cent).

Trust can originate from organisational openness and transparency. At the same time, transparent communication is often used as a buzzword and is difficult to achieve in practice. PR professionals report that transparency is the biggest challenge of trust-building communication. 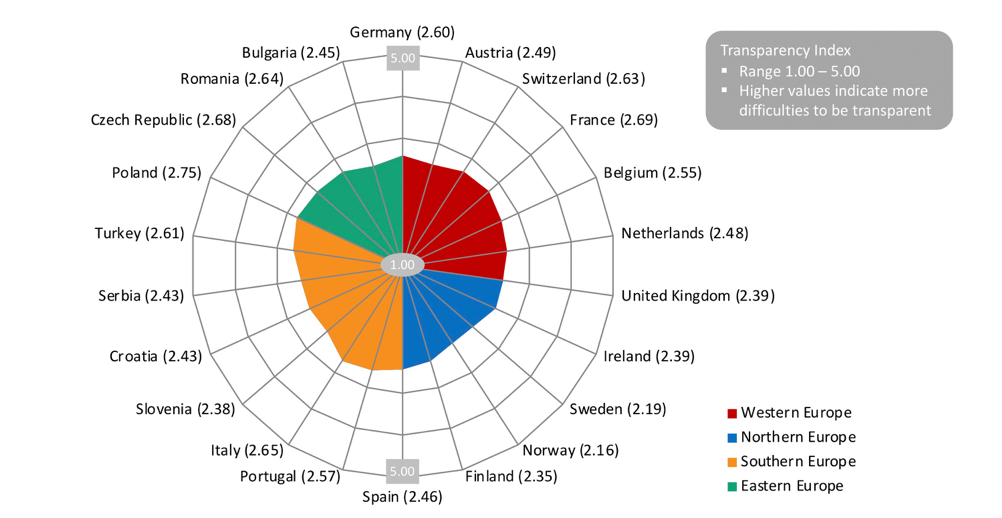 Transparency index for communications: Organisations from Northern Europe find it less difficult to be transparent

Issues like strategies and internal processes are well-kept secrets whereas political standpoints of the top management might have controversial effects when debated openly. Respondents find it most difficult to communicate transparently about the political stance of their leadership team (41 per cent think this is difficult) and about internal processes and workflows (35 per cent). An overall Transparency Index based on ten different issues shows that organisations from Northern Europe find it less difficult to be transparent than organisations from all other parts of Europe.

Strategic communication is entering a new phase with the introduction of Artificial Intelligence (AI). This has major implications for the professional communication of organisations, as people might be replaced or supported by software agents and devices. Three quarters of the respondents (77 per cent) think that AI will change the communication profession as a whole, but only 15 per cent of the practitioners have proven to be AI experts already. 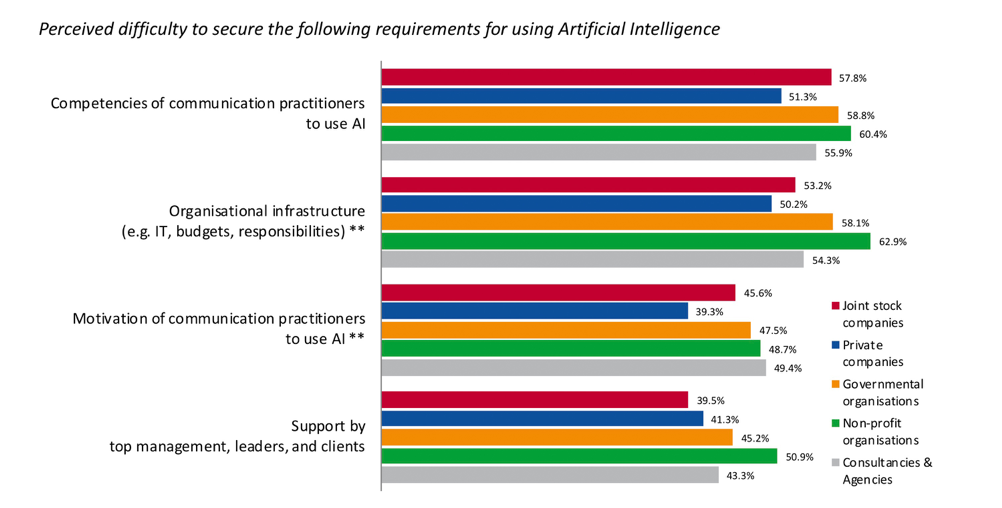 A total of 56 per cent state that it is difficult to secure competencies of communication practitioners, followed by 54 per cent who believe that information technology, budgets or organisational structure are important hurdles. Professionals among various types of organisations have different views on this: not for profits rate organisational challenges for implementing AI higher, while motivation of practitioners is a strong concern in agencies. Organisational struggles with varied staff competencies are identified as the major risk of bringing AI to communications.

Companies, non for profits and governmental organisations are no longer just providers of information for journalists and mass media, but they have become content producers and distributors on their own. The concept of Paid – Earned – Shared – Owned Media (PESO) analyses this trend by distinguishing complementary approaches to distribute content and influence stakeholders. 57 per cent of the practitioners confirm the rising importance of earned media during the last three years. 54 per cent have experienced the same for owned media and 77 per cent for content published on social media platforms by supporters of any kind (shared media). There are differing views about paid media: 38 per cent of the practitioners think this approach has gained in importance, while 36 per cent believe its value has reduced and 26 per cent see no changes. Sponsored social media content is used by every second communication department and agency (53 per cent).

The major sources for regularly creating content in European communication departments and agencies are internal: products and services, input from members of the organisation or clients and organisational strategies. Eight out of ten respondents confirm these as content inspiration. External input from users of owned media or products/services as well as topics discussed in mass or social media are considered less often.

The full report is available at www.communicationmonitor.eu

About the European Communication Monitor 2019

The European Public Relations Education and Research Association (EUPRERA) is an autonomous organisation with nearly 500 members from 40 countries interested in advancing academic research and knowledge in strategic communication. Several cross-national and comparative research and education projects are organised by affiliated universities, and a highly regarded academic congress is staged each autumn at varying locations. www.euprera.org

The European Association of Communication Directors (EACD) attracts, inspires and engages current and future communication leaders to drive excellence in our profession. Recognising the growing importance of communications, we offer professionals a platform to connect, deepen their expertise, share best practice, establish and promote standards. www.eacd-online.eu

Additional information, reports for all previous ECM studies and an interactive benchmarking tool that allows users to compare their experiences with ECM data are available at www.communicationmonitor.eu.